It is useful to analyze necessity of IDS/IPS implementation in each network fragment. If we try to analyze traffic in the users’ segment we must think about situations where workstations may be attacked and vice versa, where user PC is a potential attacker.

End user workstation may be attacked because it:

Users’ PC may be attacked by means of:
Why workstations may be a source of attack or confidential information leakage:

The highest-priority infrastructure fragment which must be protected is datacenter contains business-critical servers especially DMZ-located ones. These server farms may be at risk of:

Successfully hacked, infected or improperly configured servers may pose a threat for:

After the decision making for infrastructure segment protection by IDS/IPS it is necessary to specify the network sensor mode for deployment:

Each mode has its’ own advantages and disadvantages described in Table 1.

The next question is the architectural place to install IDS/IPS network sensor. For example, corporate network fragment has architecture described on Picture 1. 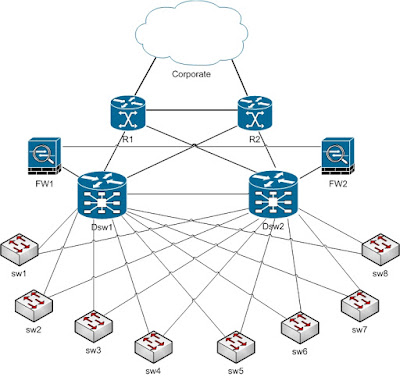 
If we use IDS, IPS shun or IPS RST, it is necessary to monitor and analyze almost all network traffic on the site. This task is possible to realize by SPAN/VACL-capture sessions configuration on every access level switch sw1-sw8 and distribution switches Dsw1-Dsw2, but it will affect on network sensor load, its’ needed interfaces quantity requirements, throughput and price. Another minus of such traffic monitoring solution is a large amount of duplicated packets mirrored by every device between peers. So, the most effective way to prevent packets duplication is to monitor traffic in each segment configuring SPAN/VACL-capture session on distribution layer switches with such characteristics set:
There are two appropriate switches on described architecture: Dsw1 and Dsw2. It is necessary to inspect traffic on these devices. If we use network sensor in IDS mode it is possible to connect each sensor to one device or it may aggregate SPAN-sessions from both switches depending on network sensor vendor and model (Pic. 2). It is the best solution for traffic monitoring because it is possible to mirror any VLAN or interface present on distribution layer switch. 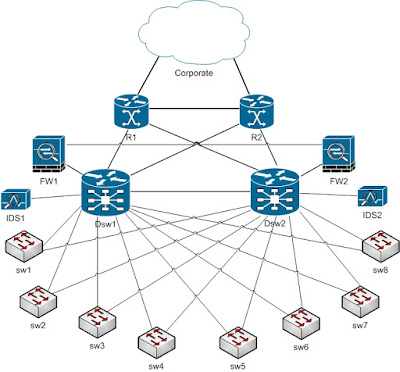 
If we use IPS RST the architecture will be the same but it may be needed some reconfiguration of SPAN-session and anti-spoofing protection disabling on some routed interfaces. Configuration changes may vary depending on network design and TCP RST sending realization in the network sensor.

If the infrastructure protection is performed using inline IPS there are two possible points of its’ implementation in the scheme (Pic. 1) Dswx-Rx segment and Dswx-FWx one.

The path Dswx-Rx is used for inline IPS implementation when it is necessary to inspect outgoing traffic from network fragment or incoming to it without necessity to protect intra-site connections.


If we deploy inline IPS on the Dswx-FWx link it is the best solution for the complete intra- and inter-segment traffic control. Depending on the network sensor characteristics and network design it is possible to analyze internal and external traffic flows together or independently. But this point of implementation is the most vulnerable to IPS resources overload attacks from the users in the corporate network if the internal subnets are going through IPS.

In the highest security trend the network traffic must be secured or dropped. So, the most important tasks in this case are the network sensor settings:

The business continuity policy trend determines such network sensor requirements as:
One more blocking factor for IPS inline deployment is the specific business applications usage. Their network interactions may be identified as suspicious traffic or malicious activity and it may be blocked. Another minus of IPS is increasing delay and it may interrupt some business applications functioning through the network. But everybody can see that the best feature of inline IPS is online proactive attacks prevention.

The right architectural point selection for IDS/IPS network sensors implementation allows expenses minimization for information security. The correct solution may allow to inspect needed traffic only and decrease false positive events. In spite of IDS/IPS mode these devices must be installed closer to distribution layer switches. If we implement inline IPS we must realize that it is one more point of failure and bottleneck in the network and it is necessary to define network security policy trend (business continuity or the most secure trend) to form IPS technical requirements.

To be continued... The next part is described in Throughput Metering article
Автор: Andrey Dugin на 17:26